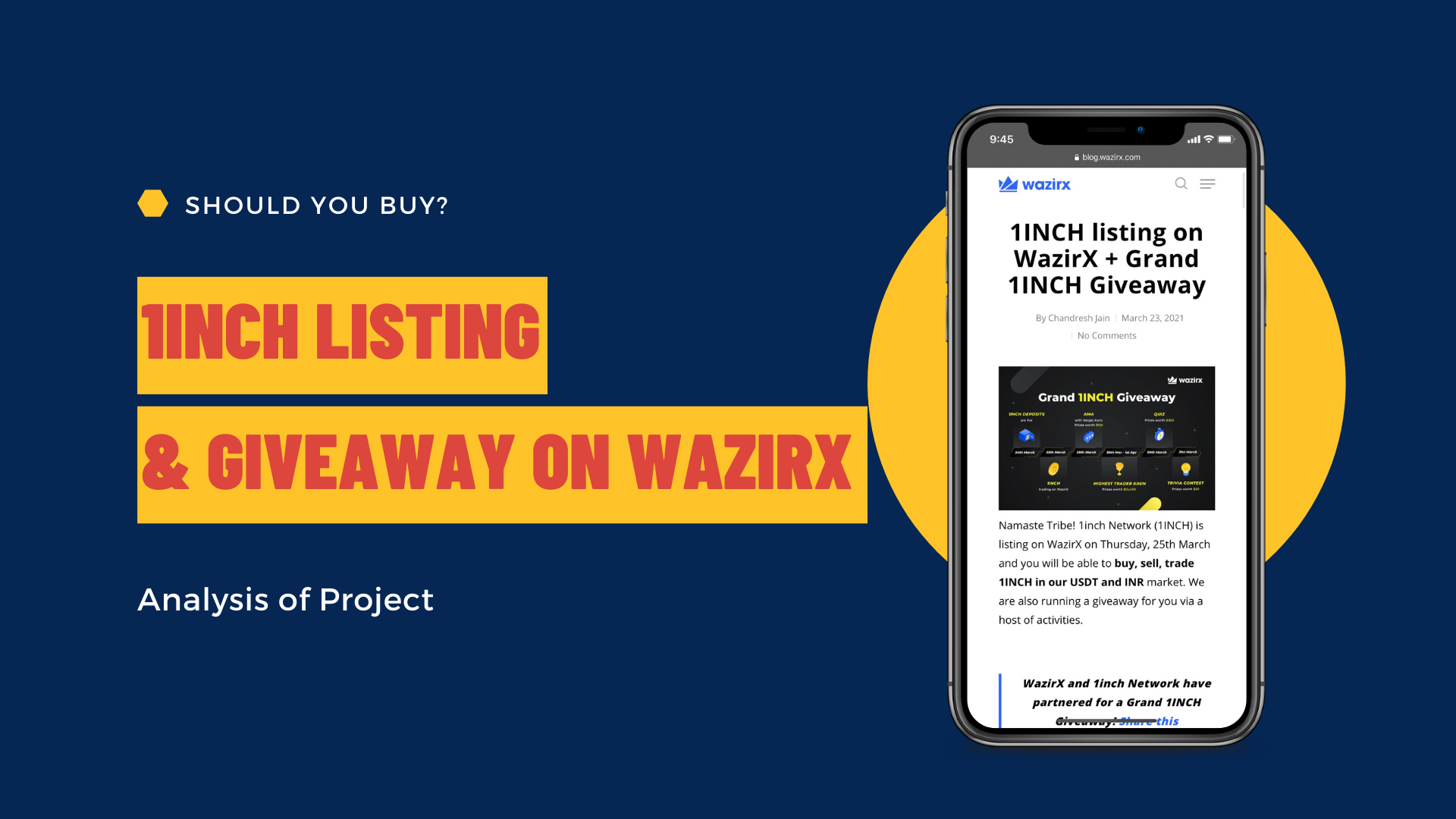 1Inch Project Analysis and Giveaway on WazirX | What is a DEX and how it works?

Before starting out the discussion on project 1inch, let’s try to understand in simple terms what are Decentralized Exchanges. From the name itself, DEX’s or Decentralized Exchanges are cryptocurrency exchanges that don’t need any third party or central authority to govern them or run them. There won’t be any single company which would run the order books. The best part is, anyone can trade on a decentralized exchange, traders only need to connect their Compatible Wallets not disclosing their personal information like Name or ID proof to companies.

Among some of the leading DEX’s are Uniswap, PanCakeSwap, SushiSwap, etc. But all of these exchanges, are comparatively new and structured in different ways. The price of tokens in these dex’s is based on demand and supply which leads to chances of arbitrage among traders. So chances are there that Ethereum might be selling for a different price on UniSwap than it would on PanCakeSwap. If there had been a chance in some way to grab the best price of a decentralized exchange that’s called 1Inch.

1Inch is called a DEX aggregator, which in simple terms means that it goes across a handful of decentralized exchanges for the cheapest prices and then reroutes its customer’s trades between them to make sure that they get the best prices.

Let’s understand further by an example, say you want to buy some UFT using Ethereum on a decentralized exchange, you will find that prices will vary as different exchanges charge various fees. 1inch’s algorithm will find the cheapest way to place that same trade using all the various exchanges and liquidity protocols which can facilitate that trade.

The Cheapest Way to place this trade might be by swapping different protocols for several different currencies before it arrives at UFT. By doing all these, the only advantage you get is in price and you will pay less for the transaction.

The launch of 1inch’s V2 platform in late 2020 made everything quicker and cheaper yet again. It added some more complex trades to keep prices low, such as rerouting money earmarked as collateral for loans on decentralized lending protocols Aave and Compound.

1Inch token was launched back in 25th December, 2020 and it’s used as a governance token meaning that it can be used to vote on the way that the 1inch platform is run. 1inch distributed a lot of tokens at the end of 2020 where people could claim tokens by providing money to 1inch’s own protocol (Mooniswap).

Later, in December 2020, 1inch raised another $12 million in series A funding as mentioned on CoinMarketCap.

1inch was founded by Sergej Kunz and Anton Bukov over the course of ETHNewYork hackathon in 2019. The two had earlier met during a live stream of Kunz’z YouTube Channel.

1inch is non-custodial and all trades take place within one transaction from a user’s Ethereum based Wallet.

Where Can you buy 1Inch?

Starting 25th March 2021, you can trade 1inch on WazirX Exchange both in INR and USDT markets. They also have a bunch of giveaways and competitions lined up for the upcoming few days like Highest Trader Kaun Marathon and Quiz on Telegram Channel. More details on the events here,

Get ready for a new format of Highest Trader Kaun Marathon with more prizes and more chances to win!

What’s new in the contest?

That was all Folks 🙌🏻, see you in the next article.